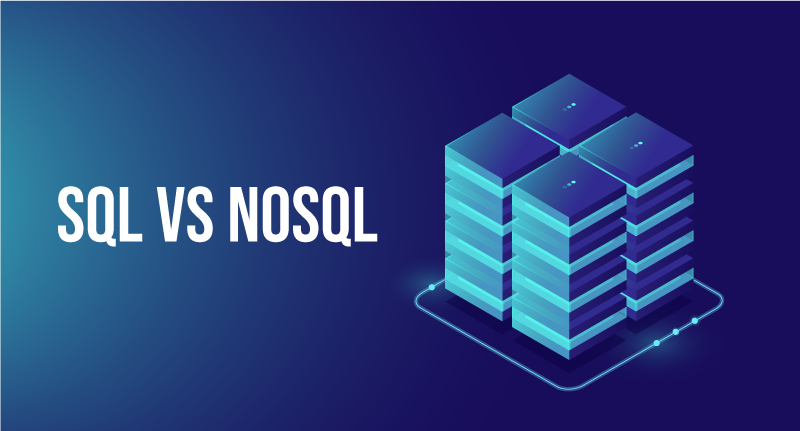 Today we are going to compare the two commonly used databases. The competition between SQL vs NoSQL always confuses the developers in selecting the best one for their data storage. The software developers must have a complete know-how of both databases. In today’s world of science and technology, storing data is a vital task. Anyone can not work without storing the previous data that is collected. SQL and NoSQL are the two types of databases commonly used for storing data for a more extended period.

Before diving into the detailed analysis of SQL vs. NoSQL database, we will discuss each separately. We will also discuss the uses and differences among both types of databases. So let’s get started.

Are you familiar with a relational database? If not, let’s discuss it first. A relational database helps us to compare two different data pieces from the same database. In simple words, we can say that it organizes the data into rows and columns to make it easy to understand.

A relational Database Management system (RDBMS) helps to keep a relational database working. You can access the data stored in RDBMS with the help of SQL. Some RDBMS have SQL usage, including Db2, PostgreSQL, MySQL, and the Oracle database.

Carl Strozzi first put forward the concept of NoSQL in 1998. NoSQL stands for “Not Only SQL” or “Not SQL.” But actually, we can’t say that the RDBMS that supports NoSQL will not support SQL. It is possible that a NoSQL RDBMS also supports the SQL.

When we talk about NoSQL, we need to know about non-relational databases or distributed databases. It is a non-relational DMS that helps to store terrifically vast amounts of data. In simple words, we can say that NoSQL is a non-RDBMS database.

A NoSQL database can store all data types, including structured, semistructured, polymorphic, and unstructured data. Some examples of NoSQL databases include Redis, CouchDB, MongoDB, Elasticsearch, and Cassandra.

SQL and NoSQL have different applications in the same field. The primary task of both types of languages is to maintain their respective databases. NoSQL is mainly used for storing vast amounts of data, while SQL is used to access the stored data in RDBMS.

Through SQL, you can create a new database or insert data into a database. SQL does every operation in databases. Like data deletion, data modification, data retrieving, and data restoration, all are done with the help of SQL.

The NoSQL programming language helps create a database for storing a vast amount of data. In industry, NoSQL has several applications, where it plays a significant role in maintaining the database. The reason behind its vast applications is its high-quality scalability. Mobile applications, Ad targeting companies, social apps, or gaming apps are applications where the developers use NoSQL. Besides this, certain e-commerce companies also prefer to use NoSQL to store their vast data properly.

Differences between SQL vs NoSQL

The main difference between SQL and NoSQL is that the former is relational while the latter is nonrelational. The other differences are discussed briefly for excellent understanding. So let’s start with the differences.

The SQL database is designed for the traditional RDBMS, and we can use it for OLAP systems. On the other hand, the NoSQL database was designed to fulfill the requirements of modern applications. It is based on different kinds of database technologies.

The examples are the best way through which you can prove a difference between things. So here we are going to discuss the examples of both types of databases for your better understanding.

SQL restricts the user from working with a predefined schema, and it is best suited for solving complex queries. If we compare NoSQL with it, we will find that a NoSQL database has a dynamic schema. It can help and is best suited to keep different types of data in a single database. In SQL, there is only one type, and we can only find some minor variations there. On the other hand, NoSQL has many types of variations. Document databases and Graph databases are some of the variations in NoSQL.

SQL is a mixture of several open source applications like Oracle, MySQL, and Postgres. In contrast, NoSQL open source has a long list where you can find many more applications. MongoDB is on the top of the list, followed by Cassandra, CouchDB, Redis, and many more.

When we talk about consistency, SQL takes the lead. SQL has a firm consistency on average. Incase of NoSQL, we consider the DBMS to figure out the consistency. MongoDB offers strong consistency, while Cassandra only offers eventual consistency.

When keeping in view the best features of both SQL and NoSQL, we can see that both have several nifty features. The best features of SQL include cross-platform support, security, and authentication measures. SQL is available for free.

Incase of NoSQL, the best features are high performance and flexibility. Many professional developers recommend it due to its easy-to-use feature. It is free of complex features that make it difficult for beginners.

Is NoSQL easier than SQL?

NoSQL is easy to use and also best for beginners as it is easy to learn. When we compare SQL vs. NoSQL, SQL seems a little bit difficult when compared to NoSQL. The reason is that SQL has several complicated features that make its use difficult. What is the difference between SQL, MySQL, and NoSQL?

The main thing that differentiates SQL and NoSQL from MySQL is that SQL and NoSQL are query languages. In contrast, MySQL is a relational database. SQL and NoSQL store and manipulate data, while MySQL supports the storing and modification of data.

Does Amazon use SQL or NoSQL?

Amazon is a vast web store that has to store thousands of terabytes of data daily. SQL can not support such massive data and can flop. To avoid this, Amazon uses NoSQL as it is better for storing vast data structures.

When should I use NoSQL?

If you are programming for some application with vast data reserves, you should probably use NoSQL. When you have to store unstructured or semistructured data, NoSQL is the best option for you.

We can conclude that both SQL and NoSQL have distinct features, making them the best programming languages. We can not prioritize any of the languages as even the most experts are unable to do this.

Which of them is the best language? The answer to this question depends on your requirements. Whether you need to store and manipulate data, or you want to store a vast amount of data.The above article was all about SQL vs NoSQL. A detailed comparison and a summary of both languages help to understand both languages clearly. If you have any queries, you can ask us in the comment section. Also, let us know how the article was and whether it proved fruitful to you or not.